Where Do Active Shootings Take Place?

To answer this question, we first need to define what an active shooter is. The Department of Homeland Security defines an active shooter as “an individual actively engaged in killing or attempting to kill people in a confined and populated area; in most cases, active shooters use firearms(s) and there is no pattern or method to their selection of victims.1”

Implicit in this definition is the shooter’s use of one or more firearms. The active aspect of the definition inherently implies that both law enforcement personnel and citizens have the potential to affect the outcome of the event based upon their responses to the situation.

The official definition excludes “gang- and drug-related shootings and gun-related incidents that appeared not to have put other people in peril (e.g., the accidental discharge of a firearm in a bar).1”

The FBI has released several reports on Active Shooter Incidents that have taken place from 2000-2018. The incidents in these reports all involved the use of firearms.

Of the 277 active shooter incidents from 2000-2018, most took place inside of commercial facilities, most of which were open to public traffic.

Here is a breakdown of where these incidents took place. 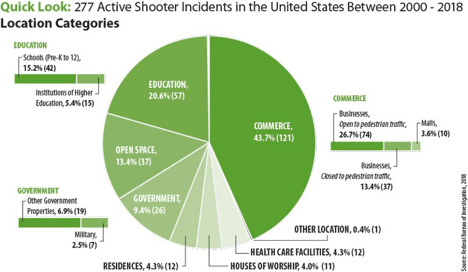